“Toile” is one of those decorating terms that often confuses people.  Like “matelasse,” this French word even has many tongues tied in knots!  Read on to learn a bit about toile…

Toile is timeless.  While its popularity does ebb and flow as most design and decorating styles and colors do, toile has been around in some form or another since the late 18th century.  The word is shortened from “Toile de Jouy,” which literally means “cloth from Jouy” (a town in France where it originated.)

A traditional toile from Greenhouse Design

A toile fabric (pronounced “twall”…like “fall”) features a printed design depicting a scene or activity of some kind.  Often, the prints are very detailed and depict a rural scene including farm animals and people.  The fabric is typically a woven cotton and chintz is often the base cloth of choice.

Traditionally, a toile was monochomatic, created with one ink color printed atop a white or ivory background.  Deep red, black and blue were traditional toile colors, but others including green were also used. 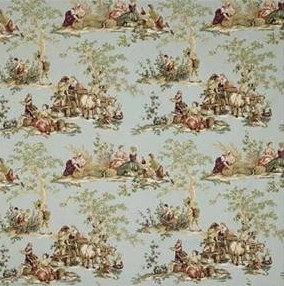 A multicolored toile from Kravet

Today, in addition to the more traditional color schemes, you will sometimes see a toile fabric printed with multiple ink colors, resulting in a more realistic scene.  You can also find toile fabrics featuring light ink on a deep background, and scenes of Asian locations instead of the traditional French countryside landscapes. 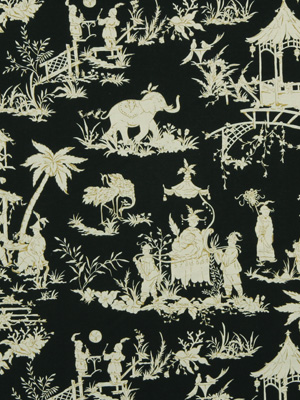 A black toile with an Asian motif from Robert Allen Design

Since toiles are usually fairly light to medium-weight fabrics, they can be used on anything from decorative pillows to upholstered furniture to window treatments.  You may also find toile patterns printed on everything from ceramic tiles to bath towels.

Toiles are at home in traditional or cottage-style homes.  They can also dress up a more rustic setting and they can be added to even a modern home in moderation. Choose a color that works with your home’s color palette and give toile fabrics a try in your home.

One Response to What Is Toile?